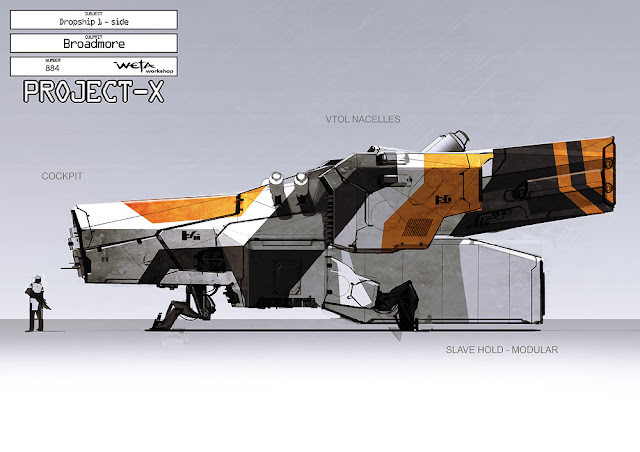 The Dropship from District 9 was developed very quickly. Just a few concept drawings, all of the same design and it was on it's way into the film.

Above you can see one of the early sketches that nailed down the silhouette and angular form, followed by a paint-over from a later stage of an in-production film model.

This quick concept sketch shows concepts like the modular slave hold, mimicking an insectile abdomen at the rear of the ship.
The idea was that the Dropship would carry various modular containers and in this case held a prison like container for the worker aliens. 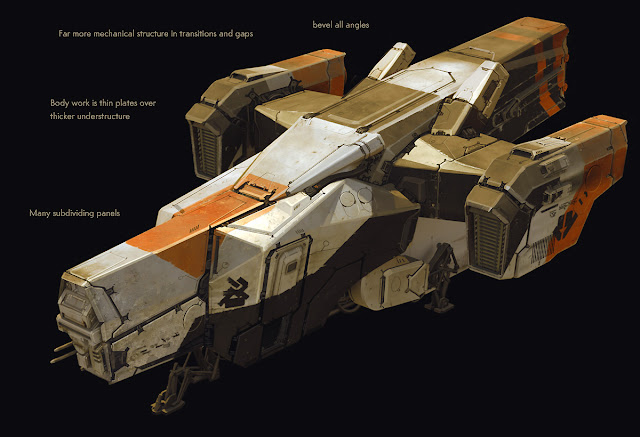 The Embassy VFX created the first model from my super basic, quasi-retarded Sketchup mess, but I needed to do this paint-over to illustrated details and construction that weren't evident in the first concept drawings.

In the end, Weta Digital handled most of the Mothership and Dropship scenes in the film and added even further detail so that it held up when the camera got very close.
Posted by Greg Broadmore at 01:15

That's awesome Greg. I loved the design of this ship. The design isn't over thought at all, which makes it that much more real feeling.

The paintover is really nice as well. man, I really loved the coloring of the Alien stuff. It was so bold and awesome.

Great work, thanks for sharing.

I just Love the world of District 9! And this artwork Blows my mind.

I hope... They Make district 10 or something. And maybe the aliens actually do come back to earth after 3 years to fuck up the humans!!!

And the only person who can save them is Wikus

Then again im sure Peter Jackson has to get moving on HALO Movie! if in doubt-

Not sure if you're allowed to answer this, but do you think it's likely that the dropship and mothership will be made as collectibles? And how about an art book? hehe

By the way, congratulations on the Arc Generator replica sell-out. It is truly a beautiful weapon... as ironic as that sounds.

Yes, it's hard to imagine a version of D10 (or whatever it may be) with out aliens coming back with a vengeance.
Knowing Neill though, it will never be as simple as that.

Sinead - Yes, you're right, I can't tell you which collectibles are coming.
But I think you'll like what we're working on when you see it.

Awesome! Thanks for the images!!

your style of mechanical design is amazing!!! D-9 was a great, and realistic movie, beyond the sci-fi.
i'm waiting 3 years for D-10

Great stuff Greg, finally someone else who shares the design sense to make things believable and not just slick for the sake of being cool.

Glad to see you get to display it too. Too often concept art is kept hidden because of studio control.

Can't wait to see what you do next!
cheers!

I think that's your sexiest robot yet! And that alien's no slouch either!
PPC Advertising India

I loved the design of the dropship in D9! It was so cool to see it lift off the ground. The way it was shot in the movie made me nearly forget that it wasn’t REAL, that there was nothing there when they were filming. The visual effects in D9 are definitely a huge factor why it’s a movie that South Africa can be proud of.