While I was in Switzerland for the NIFFF and Imaging the Future Symposium, I did a few interviews, this one was with Romain Basset from SciFi Universe.com

It was mainly about District 9 but they will be following up shortly with another focusing on my science fiction world, Dr. Grordbort's.

Oh yeah, the article is in French, but the video interview is in Freddie Mercury's English. 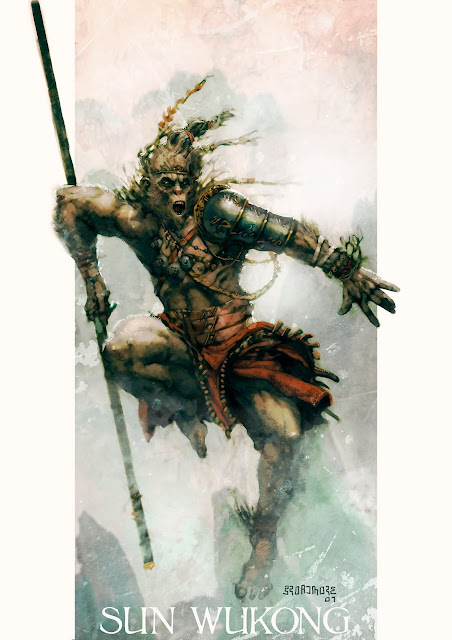 This is a piece I did a few years back now. Found it buried at the back of my garden - I clean forgot about it!

I've been really interested in Sun Wukong, the Monkey King since I was a kid.
A lot of people might remember the super fun Japanese television show, and while that hooked me, it wasn't until I read an English translation for Journey to the West that I became properly fascinated with the character.

While I was in Shanghai I got to talking about Monkey again with a young guy, Jackee, who helped us put on the Grordbort's and Weta exhibition there, and he gave me a new, four volume set of Journey to the West, by a different translator.

It reminded me that I really like these types of characters, and that in a way, I've made my own, Lord Cockswain in a similar mold.
Sun Wukong is really an anti-hero, and an indomitable ego, someone beyond the influence of anyone - Kings, Gods and public officials are just obstacles or annoyances.

Something about that sort of impervious psyche is appealing to me, and fun to embody in a character.
Posted by Greg Broadmore at 19:01 7 comments