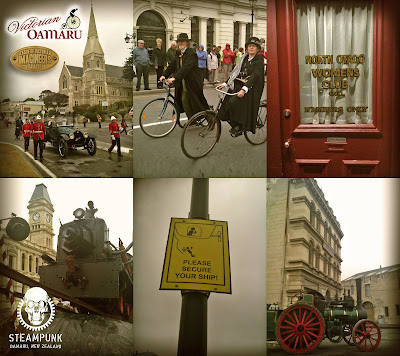 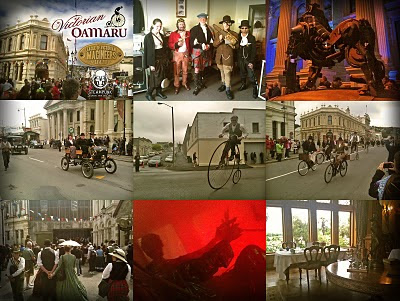 'How was your weekend, Greg?' you ask. Well thank you for asking, it was pretty bloody brilliant!
I was very graciously flown down to Oamaru in the South Island of New Zealand by Sally, Iain, Helen and Patrick of the League of Victorian Imagineers Oamaru as a VIP guest for their Steampunk celebrations.
The town has been celebrating its Victorian heritage for over twenty years and The League along with other like minded and artistic locals like Steam Punk Oamaru and others, have taken it upon themselves to inject a massive dose of Steampunky creativity into proceedings.
The town has beautifully preserved Victorian architecture running throughout and each year the locals have a Victorian Fete and thousands dress up for balls, functions, street parades and the like.
It's really quite unlike anything I've ever seen before.
If you're a US or European Steampunker wanting a fun trip, then I'd seriously look into bowling down to New Zealand and checking Oamaru out.
Christ, if you just like rad shit, and you live up the way in Wellington or Auckland you should get down there!
Oh yeah, we were put up at the amazing Pen-y-bryn lodge - sweet digs. Thanks!
Ok, I have completely turned into a tourism agent for Oamaru now, so I'll call it there.
Check out some photos and follow some links!
The League of Victorian Imagineers Oamaru
Victorian Oamaru
Posted by Greg Broadmore at 20:56 2 comments

I've had these two prints for sale at the fantastic Eyeball Kicks gallery in Wellington, NZ for a while now, and I don't know that I've ever pimped them!

They're selling quickly nevertheless, so get in quick if you want to grab either of them.
They are limited to 20 (Idrisopod) and 30 (The Fall) prints, and are signed and numbered.

New prints on the way too, to coincide with the White Cloud Worlds exhibition at the Dowse. 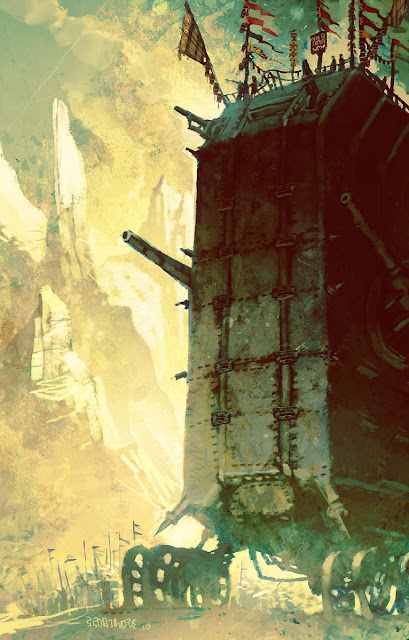 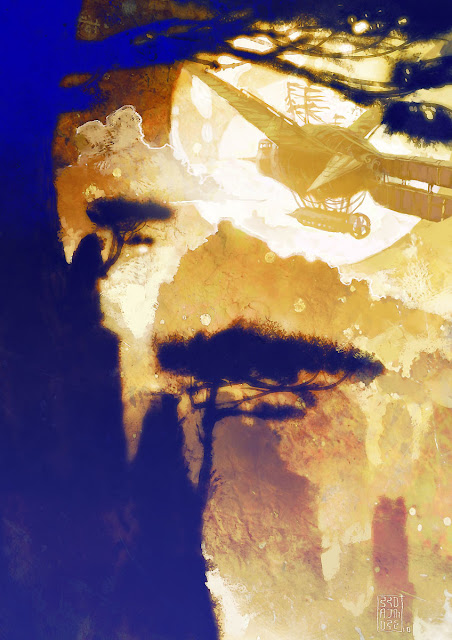 Recently I did some very quick pieces for an amazing magazine, Coilhouse.
It's the brainchild of the super cool Meredith Yayanos and is one of the flat-out styliest, high production value magazines I have ever worked on.

My illustrations on he other hand are very low production value as I took the job on because I love the mag, not realising how little time I had to actually do them due to my many commitments and projects.

Nevertheless, fast illustrations are super fun for me, and often come out better than those laboured.

The magazine article for which these accompanied was about a lost era of Chinese science fiction. Something I never even knew existed before Meredith brought it to my attention.

The mags been on sale for a bit, and is near to sold out, so get in quick if you want to pick up a copy.

Also check out Paul Tobin's blog for a glimpse at his amazing piece for the same article.

Check out the magazine!