The Deadliest Game and K3loid 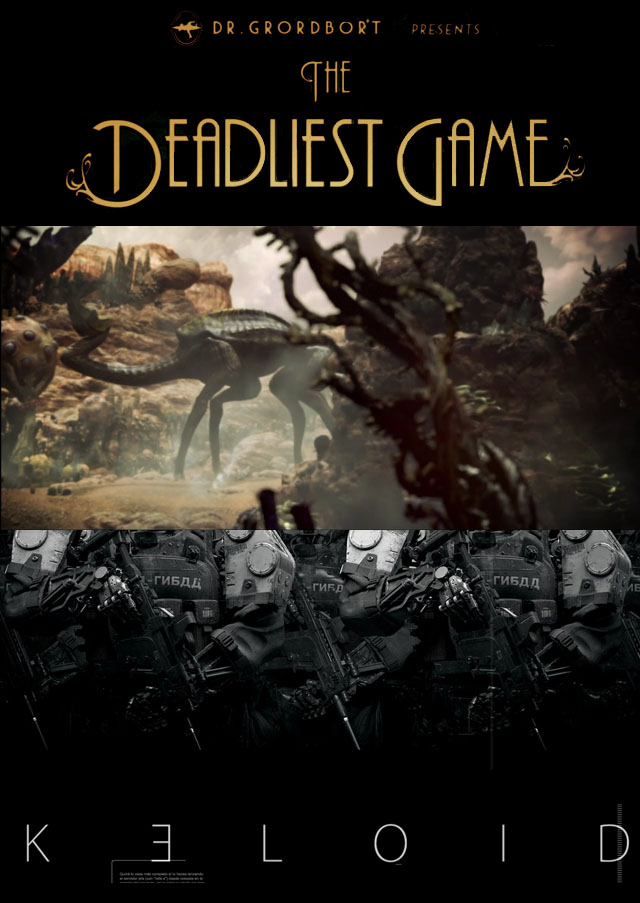 I'm pretty excited at the moment - I've just finished work on the comic pages for my new Dr Grordbort book (the third one) and it's been a mammoth undertaking.
It's meant I've neglected the blog of course, as I've been head down, illustrating, writing, and generally forging away at what seemed like a small project when I started, but actually took (as any creator of comics and books will attest) a colossal amount of effort.
I can't wait to see it in print, but that'll be months away yet.

In the meantime, two shorts have surfaced that I had a little to do with.

Firstly, a teaser has been released for the Media Design schools amazing, 'The Deadliest Game'.
The full short should be out soonish, and I saw it in Wellington at it's premiere here at the Roxy last week.
It's a stunning achievement and still blows my mind that it was created by students - when I was a student, I made flip-book ninja's decapitate each other in my maths books.
I DIDN'T CREATE VISUAL EFFECTS HEAVY SHORT FILMS!
I have to say that I had next to zero to do with it's creation, but am exceptionally proud to have it represent the DrG world I've spent these last several years developing.

Secondly, but by no means secondly, is K3loid from the amazing guys at Big Lazy Robot in Spain.
Famed for their work on The Gift, these guys have outdone themselves again.
JJ at BLR contacted me what seems like ages ago, to contribute design to the short, and I was intrigued from the start.
It looks absolutely incredible, and in this teaser, features Aaron Becks' work as shown on his blog.