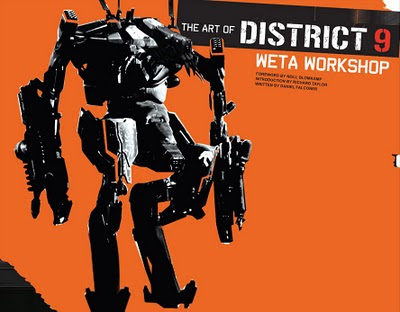 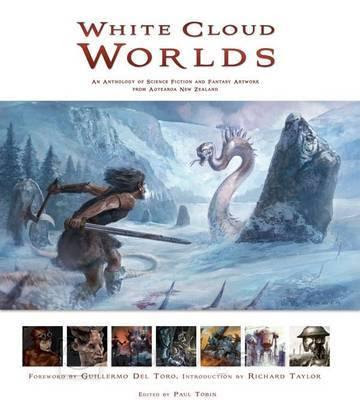 Two new books featuring my work, as well as that of many others from Weta Workshop are nearing release.
The Art of District 9 which was put together by Weta's Daniel Falconer is out soon. This weekend in fact.
I, along with Leri Greer, David Meng, Daniel and Richard Taylor will be presenting a short talk this Friday about the making of the movie at Wellingtons Embassy Theater as part of a launch event for the book, and following that a few of us will be signing copies at the Wetacave.
If you're in Wellington, come along and say hi.
It's a pretty stunning book if I do say so, and showcases a massive chunk of the work we did on the film. You'll get to see plenty of art that's never been seen before, like Christian Pearce's early concepts that didn't make it into the film, but formed a bedrock for us to work from, as well as some of my production art featuring much earlier iterations of the final designs.
Following that, White Cloud Worlds is due out, which is an anthology of New Zealand fantasy and sci-fi art.
It's the result of the earnest efforts of my good friends and fellow Wetites, Paul Tobin and Kate Jorgenson.
I'm super proud to be part of it as I've always sought after books of this type my whole life - compendiums of fantastical art - and now I get to be in one of the best.
I hope you enjoy them!
Update - link to limited edition version White Cloud Worlds at WetaNZ
link to White Cloud Worlds Official Website
Posted by Greg Broadmore at 00:55

Awesome. First day buy for me. I'm a huge fan of all the work you guys do down there.

You likely don't remember, but you were kind enough to take a look at my work at Comiccon in San Diego over the summer. Just wanted to say how much I appreciated it: it was easily one of the best crits of my work I have received in a long time.

Just ordered the book! Really looking forward to it :)

Greg, I can't see the whitecloudworlds blog. It seems that I need an invitation. How can I get it?

Hey Teresa,
yep, it looks like the blog is not live yet.
I think I have jumped the gun on that one. Hopefully it'll come online soon.

\Wtf BEN? You mistaken Greg for being Homosexual.

IS Ben suggesting he is A homosexual instead... I wonder....hmmm?

Ryan, You may want to ease down on the comments - what would be wrong with being homosexual?
I am not (sorry guys) but Ben does have a wonderful butt and it can be extremely tempting.

So, you're saying I've been wasting my time?

Doug, you have not wasted your time.
I have noted your 'knowing glances' and 'vague innuendos' for some time and have you listed in my 'Top Ten fall backs following the imminent Gaypocalypse'

I have no problem with homosexuality.

But I feel Ben has accused you of being Homosexual.

Unfortunately one upsetting aspect you may not like, I have a problem with Race mixing. That is probably the strongest opposition I have. For me to see a black man with a white woman for example. is a.. is a huge upset. I feel its disgraceful burdens the bloodline.

But even thou these things exist I will be dead in 40 years and everything I known and felt for will vanish in the cosmic solar night...

in other words. I loose interest in the strongest things I feel for, much of what I beleive in are symbolically weak. So to hate someone of other race- I don't. But if they are mixing, that I don't appreciate. I think its only fair and reasonable for both parties intrest that they strengthen there own bloodline. Say for example, the Natives here in My Province. They should continue to offspring there own kind instead of mixing with the white folk. This is only tradition, this is something that dosnt provoke race matters. I hear it all too well, or racial slurrs in our society, people you never thing would be racist are infact.

Any population can be overwhelemed by the sudden power of Racism, its easy for it to manifest. These are the hidden virtues of man. To strength the desire for strong race, This is what is called pride and tradition. These are the natural embodiment of man itself-

Do I have a problem with Homosexuality. Of course not. You can put a bullet in a homosexual, and the next day some baby is born being homosexual. Fact is you cant rid of it, and its just natural.

Im not going to walk up to a white man and say your dateing a Chinese Thats not Right- No of course not.

But im not going to look at you and talk to you either. I would never go out with a chinese person. Becuase I dont want my kids to look fugly

On the other note I strongly oppose homosexuality becuase I dont like them, Infact I hate them! but I dont wish them to die. I just dont like them becuase there mentality is.... off from the majority.

You wanted to know what I feel this is what I feel. These are my own personal beliefs. I dont infringe them on anyone else. They are there to represent how I feel. I feel its fair.

Thanks for all that, Ryan.
Perhaps you can keep your ideologies to you own blog though, and leave mine for comments on it's content.

And thanks Jon and Zachary. I hope you like the book.
Zachary, hopefully I'll make it to next years SDCC and we can catch up again.

I'm a big fan of your work Greg. I'm working on airport objects for my rc simulator "Realflight G5" and I'm calling it District 10. I'll be buying the book soon to get a better view of your artwork as many of the objects I'm creating are inspired by your designs for District 9.

If you want to check out my site with my 3D work, I'll gladly share the link with you, but I'm not going to just post it on your blog.

Hi...Myself914 feels very strange writing that as a name...
Thanks man, I'd love to check out your project as it comes together. Please fell free to send the details to my address listed at the top of the blog.