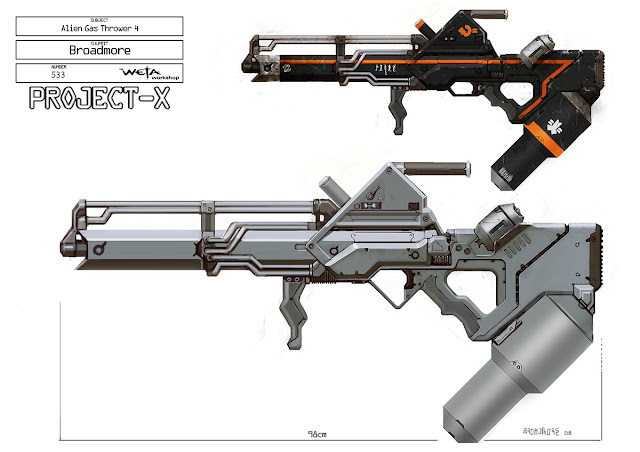 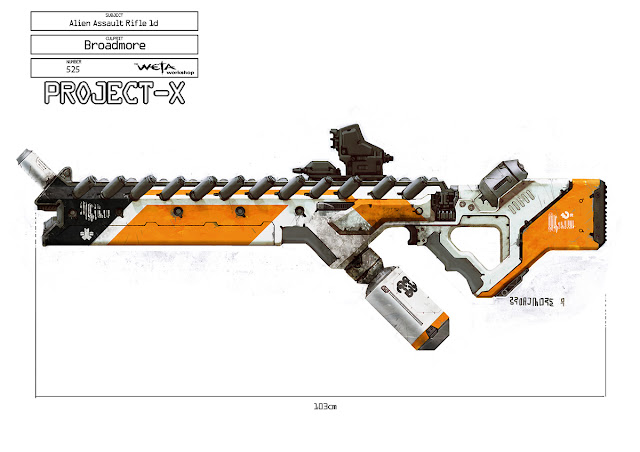 There were also versions of the Arc Generator and the Assault Rifle adjusted to go on the Exo suit.
Posted by Greg Broadmore at 20:17

Flippin' awesome designs, man. This makes me hungrier than ever for IFX 50!

can't wait to get my hands on that issue. These are fantastic, Greg.

I was wonder what the black thing on top of the assault rifle is. is it somekind of scope?

Sir, the work you did for District 9 is trully amazing. I had been looking for you since I saw the film.
And I'll keep comming back for more!
Thanks for sharing =)

love the guns! specially the arch gen is my favorite.

Finally caught the film tonight (w/Neill & Terry Q&A... nice!) and man, it was great. Loved all the tech; Nice job!

Thanks!
Merlin - the black device on the top of the gun was intended to be a bit of sighting tech. (a scope, collimating sight, range finder etc..)
You never got to see it in detail in the film of course.
There's also a little black box with an antenna in front which is a sighting computer and transmitter - to an eye piece for instance)
Hey Chris - you saw the film with Neill and Terri? Was that a Q&A or something?
Glad you enjoyed it!
GB