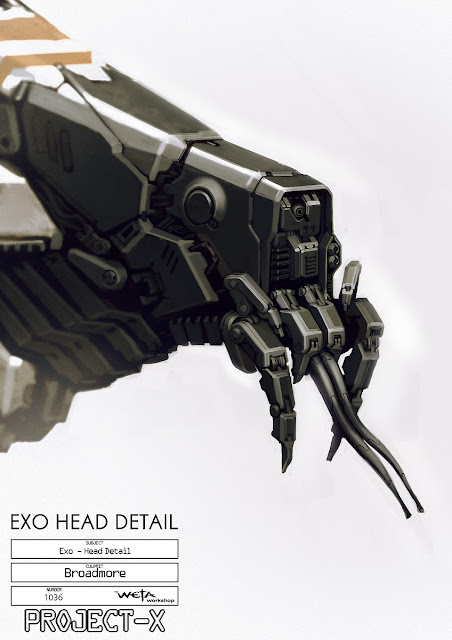 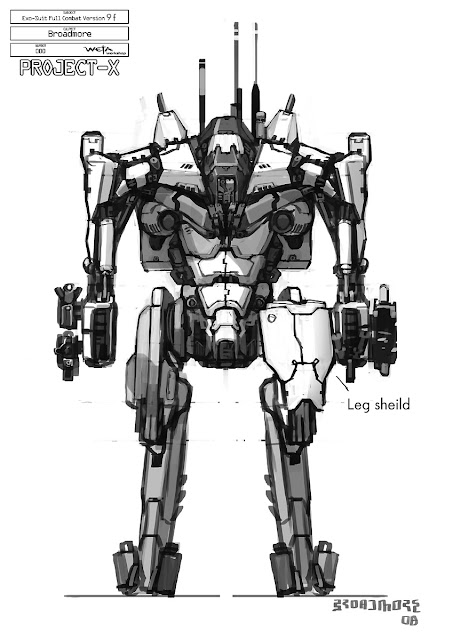 Tune in next time when more pictures of things are accompanied by hyper-nerdy descriptions.
Posted by Greg Broadmore at 00:20

Sweet. Thanks a lot for sharing :)

So cool man! I really like the quick fontal view of the Exo Suit its fucking awesome, it would have been interesting if it have been white in the movie. it would have stand out but then again so does the black. Looking forward to more, and thanks for sharing.
later.

thanks for Sharing this

Great to see this stuff out in the public eye man! Surprised how few comments there are though, you obviously are not an internet whore like ya know ya could be. Could have all kinds of flaming and trolling in here, imagine how fun that would be :)

I see you chucked a link to me too! Muchos Gracias! You even gave me a cooler nick name than "that guy wot is always drawin that gay stuffs'. Respect :)

PLEASE POST up more images of the robot!! it's amazing.. why didn't you release a book on the concept art?

Love your work Greg! My girl and I went and saw District 9 two days in a row one weekend and it's all because of your kick ass mechs, creatures, guns and well everything..the movie was damn good too. :) My deepest thanks for the timeless inspiration.

Damn,thanks guys.
Glad you guys are enjoying the work.
Will try and post more as I get time.
I would love to do a concept art book
Esmond, we would all love to do that at Weta.
It's surprisingly more difficult than you would guess to get something like that going. The most critical part of course is obtaining the license to do so.
Fingers crossed it'll pan out. There was a ton of unseen concept art by many artists on the film. It will be great to see that come to light.
Thanks again all,
GB

The suit was the best part of District 9 by far.

I have to agree, the suit was also the best thing for me in the film. The concepts are great and I think the final 3d rendering did the intial concept real justice! Great creation!

I was completely blown away by the conceptual design of the prawn's technology in the film! It's really amazing to see your actual production artwork. Ive been following you guys since LOTR! I must say that Sci-Fi fits the workshop well! I don't think there is anything you can't accomplish! :D

Greg - I just saw this movie on bluray over the weekend .
I loved it ! The designs and the feel of the grit and poverty ridden sets were stellar . This mech at the end stole the show !

Great design and execution on screen and so great to see something fresh .

I really love this, it looks cool functional and yet so alien. Its feet look like there designed to help it balance and spread out its weight etc.

It beats the Avatar mechs by a mile, they were just clunky boxes, which were neither functional or cool looking.

The way they animated it as well it felt like a heavy duty machine with inertia.